PEAMS collaborative research project aims at finding a common software platform for developing smarter work machines. This can be achieved using ROS2 as a common platform that enables companies like Navitec Systems, Mitsubishi Logisnext Europe Oy, GIM Robotics, Exertus, and Atostek to provide software and hardware for the same AGV. At the same time, research from Helsinki University and Tampere University is answering both commercial and technical questions related to the maturity and capability of ROS2.

From Navitec’s perspective, this is the first time we are using ROS2 together with our in-house build proprietary software called Navitrol. Navitrol provides localization and control for the AGVs. Navitec also offers fleet control called Navithor for controlling the fleet of AGVs. In PEAMS project we want to use standard interfaces provided by ROS2 to communicate with software provided by GIM Robotics and Atostek. We assume that open standards will make integration smoother and allow different companies to offer software components that run on the same AGV. This will be demonstrated at the end of the project in a live demonstration at Logisnext facilities in Järvenpää where AGVs from K. Hartwall and Logisnext will be driving in the real live demo. 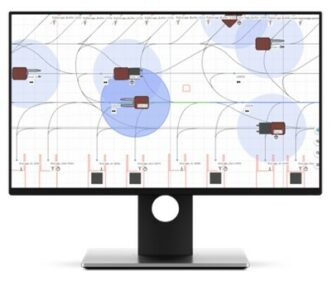 Another benefit for a company like Navitec is to have access to open-source drivers for different hardware instead of own programming,  and the ability to test and deploy existing features of the ROS2 world.

Navitec is also researching the usage of simulators to improve software development, testing, and in future also marketing. Unity was chosen as a simulation platform for Navitec. The integration work was accelerated by using the existing ROS2 interfaces. Navitec also organized a workshop for sharing experiences and knowledge between the companies about the benefits and technical aspects of the simulators.

We believe commonly used open-source software like ROS2 offers limitless opportunities for better and faster integration. We are also interested in access to new features, a wider network of developers, and a living community including forums and GitHub.